The Mermayden's Tayle
A Novel By
P.K. SILVERSON 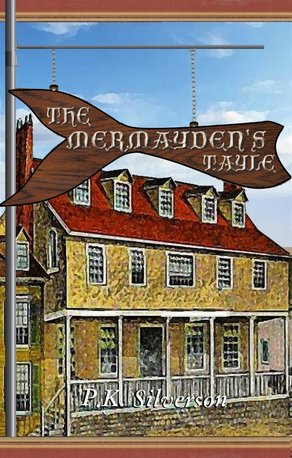 SHE'S HERE!
THE MERMAYDEN'S TAYLE
THE ENCHANTING FIFTH BOOK OF
THE MAGIC TRIANGLE TRILOGY
IS AVAILABLE NOW IN E-BOOK AND PAPERBACK.

Once upon a time, an immortal daughter of the ocean’s deities fell in love with a mortal man
descended from a feud which has lasted for centuries. Although her wish to join him
is granted by the most mischievous fairy of all, she comes to learn that,
while human love is a fragile wonder, real magic endures forever.
Of all the world’s enchanted beings, the rarest of all is the mermaid. Born in earthly seas to exiles from Paradise, she combs the ocean and the land for the meaning of life and love alone, destined to be the only one of her kind.

Only rarely allowing herself to be seen, she incites a squabble between a family of royals and a clan
of heathens. The clash becomes a bitter conflict which spans more than two thousand years.
From the earliest days of Imperial Global Rule to the Great War for Independence,
this friction builds to the point of absolute fury.

Quite unexpectedly, the mermaid finds herself in love with the a mortal descended from
the bleakest of outcasts. Through the intervention of fairy magic, she takes her place
on dry land as his bride, even though it goes against the expressed wishes of
her grandfather, the ageless lord of the oceans.

Despite the delights of earthly love, the mermaid must face endless heartbreak when
her mortal love meets his end. She returns to a melancholy sea,
not to be drawn back to land until centuries later,
lured by the pull of those born into her earthly line.

For one brief and memorable day, she reconnects with a generation of family she had not known.
Her brood includes a powerful wizard and his daughter, a convert to the Fairy Fay.
Together, they face the treachery of the clan which has tormented their family throughout
the ages and a final confrontation with dragons and pirates.